'The Down-Sizing of Another Human'


Verlin Williams writes that he is an eighth grade African-American student who found that The Year of Goodbyes "really put the reader in your mother's 'shoes.'"  He observes that discrimination is still a problem in the United States, and his poem--which has a memorable first line--takes on that problem.

Verlin's poem also specifically addresses the conflict that can arise between our free speech rights and the problem of discrimination.  How do we balance one person’s right to speak one’s mind freely with another person’s right to be free from discrimination?  Here's a thought (which I have seen attributed to Supreme Court Justice Oliver Wendell Holmes Jr.) that I find helpful in thinking about this: “The right to swing my fist ends where the other man's nose begins.”

Verlin attends Fairport Harding Middle School in Fairport Harbor, Ohio.  I hope he has the opportunity to explore these issues further.  Maybe law school is in his future?


Discrimination, the down-sizing of another human.  Period.
Why, because discrimination can deal with Race, Religion, Sexuality, Age,
Sex, etc. This unjust treatment of people can hurt the feelings of others and

Very much lead them to do harmful things, either to themselves or others.
Discrimination is an issue, a very big issue that might not be resolved.
An issue that brings out nothing but hate between two or more people.
It is breaking apart our communities and harming the world.
We, as Americans, still have discrimination today, even though we have laws
That speak about freedom of religion, sexuality, and such things that are
Supposed to help protect us.
There is one thing that doesn't help as much; freedom of speech.
It does give us the right to talk as we want to and how we please,
But it also gives the people who choose to discriminate the right to do so,
Even on international television. Some of our favorite tv shows discriminate.
This ISSUE is a PROBLEM, and this PROBLEM can be FIXED, but it WILL be a
CHALLENGE. If we do not fix this problem soon another war might break out.
Whether it be between just the U.S. and itself or it could be the world,
Causing World War III. Discrimination in our country is tearing us apart.
An ISSUE, A PROBLEM, is killing our nation, but I believe that one day we WILL change all
of this and be truly UNITED. 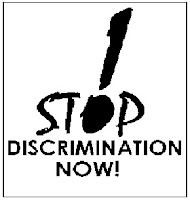