Tomorrow, January 27, is the 70th anniversary of the liberation of the Auschwitz concentration camp.

I have no fresh insights appropriate to this occasion. What I do have is a page from my mother's poesiealbum that her classmate Hannelore Ascher wrote for her on October 3, 1938--a time when these 12-year-old girls still lived in Hamburg but were hearing frightening things about Jews in Germany being arrested and then disappearing. 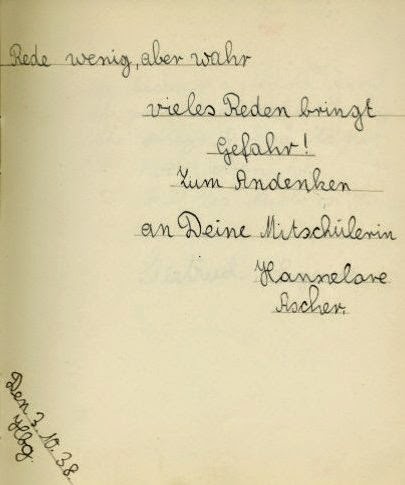 Hannelore was quoting a little couplet that German girls would have been familiar with: "Speak little but speak the truth/Too much talk is dangerous!" (In German, it rhymes.) A month later, my mom escaped Germany with her parents and sister and came to the United States. Hannelore's family did not leave in time. Hannelore was deported to Auschwitz. She did not survive the Holocaust.

I don't have a photo of Hannelore, but I wanted on this day to remember her, along with so many others, and so I'm looking at her handwriting and what she chose to share with my mother.

Also: The Washington Post has put together a video of two D.C.-area survivors of Auschwitz who talk to students and visitors at the U.S. Holocaust Memorial Museum. These two men, Henry Greenbaum and Martin Weiss, are worth your time. You will see how students hang on their every word, as did I. Do watch it:  The Holocaust's last voices.