Serena Sherwood sent me this poem that she titled "Coming To America," back in April, when she was in Mrs. Susan Tenon's eighth-grade English class at Fairport Harding School in Ohio.  How I wish I'd posted it earlier, when my mom was still here to see it!  But maybe it's appropriate that I'm only getting to it today--coincidentally, 75 years (almost to the day) after my mother and her family sailed into New York Harbor on the Queen Mary.

Here's why I say that:  Serena has taken on the point of view of my mom--that is, the 12-year-old Jutta in The Year of Goodbyes--as she and her parents and sister leave Hamburg on the midnight train, wait to board the Queen Mary in Paris, and cross the Atlantic Ocean.  This 21st-century student's channeling of Jutta's thoughts and emotions is spot-on.  Not only that, Serena conveys these thoughts and emotions, as well as the facts depicted in the book, in perfect rhyme!  I'm kind of in awe.  Enjoy, and thank you, Serena.

As the clock strikes twelve on this night
I will board a train with much fright
Early tomorrow morning I will be in France
We tour a city filled with romance
I had fun until the morning light
It was time to go on the ship, I felt quite alright

Now my family and I get to start anew
With my poesiealbum where my friends drew
I really wish they could be with me
Maybe our paths will cross, we'll see

Finally, this Thanksgiving week, I can't resist appending an article my mother wrote for her student newspaper a few years after arriving here, to illustrate how appreciative she was to be living safely in this country.  Flaws and all, this country was a haven for her as for so many others, and she never forgot that. 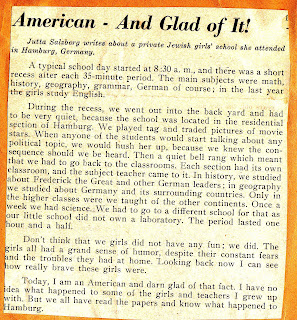